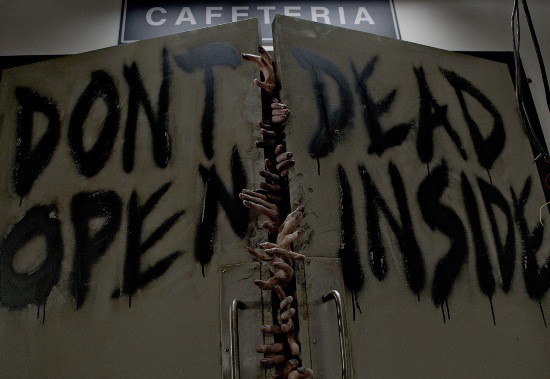 I’m a huge fan of The Walking Dead on AMC. The story of what happens to human beings when the world as they know it is replaced in a matter of weeks with an existence of running and hiding from creatures with only one objective in mind – to eat them alive – is an amazingly well-written look into what really makes us tick when we’re really reduced to simple survival.

So I was really excited about the premiere of Fear The Walking Dead (the prequel of sorts – same time period, but different location). I had my reservations, since I’m a huge fan of the original, but there was a lot of cross-over from the non-acting crew so I was hopeful.

Here’s what really got me (and it took me a few days before I realized why I was so disappointed).

Everyone behaved as if zombies don’t exist.

Never once – not even in a scene where high school students were watching a video of a formerly dead person eating someone and then taking 20 bullets to the chest and still coming at the cops before taking a head shot – did anyone ever say “Woah! That dude is a zombie! Look at that!” Even if that statement was said with the sarcastic flair only a teenager could pull off, at LEAST it would have made the whole thing a bit more believable. Because seriously, at this point in human history, even BEFORE The Walking Dead, do people really not know what a zombie is and what the scenario might look like if they ever saw a zombie encounter online? Don’t you think if there was a sudden outbreak of dead people getting up and eating the flesh of others that there might be someone out there that would say “Hey, we better start mobilizing before this starts to spread. Let’s try to figure out how to minimize the negative consequences, because as freaky as this seems right now, at least according to comic books, this could get really bad really fast.”

Which gets me to my next point – are you pretending the zombies don’t exist when it comes to your business? Are you ignoring what you know has to be true and pretending the explanation is something other than the truth? Is your pet project failing but you’ve invested too much time to let go? Are there problems you’re ignoring – problems that could start to get “really bad, really fast?”. Maybe these aren’t problems that you see – but maybe someone that works for you has come to you to express their concern. No matter how outlandish a claim may seem, it’s always important to make sure you identify any problems with an objective eye – even if it seems to bizarre (or good) to be true. As the old saying goes… “If it shuffles and groans like a zombie, eats flesh like a zombie, it’s probably a zombie…”